The latest Economist gives a geological timeline of the earth as part of their story on The Anthropocene...


"In 2000 Paul Crutzen, an eminent atmospheric chemist, realised he no longer believed he was living in the 10,000-year-old Holocene epoch, a peculiarly stable and clement part of the Quaternary period, a time distinguished by regular shifts into and out of ice ages. Mr Crutzen decided he was living in some other age, one shaped primarily by people. From their trawlers scraping the floors of the seas to their dams impounding sediment by the gigatonne, from their stripping of forests to their irrigation of farms, from their mile-deep mines to their melting of glaciers, humans were bringing about an age of planetary change. With a colleague, Eugene Stoermer, Dr Crutzen suggested this age be called the Anthropocene -- “the recent age of man” 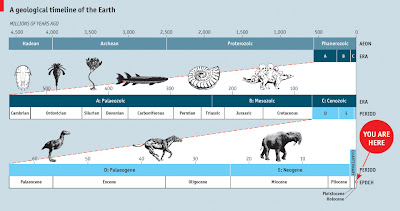 Neat; that JPEG you linked to is the first thing that finally helped me understand the relative placement of all those funky time-slice names. I didn't realize the nomenclature was "nested."