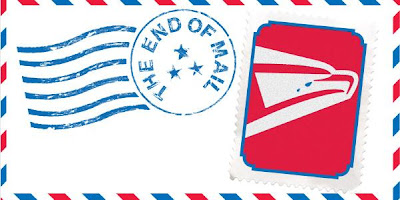 "The USPS is a wondrous American creation. Six days a week it delivers an average of 563 million pieces of mail -- 40 percent of the entire world's volume. For the price of a 44¢ stamp, you can mail a letter anywhere within the nation's borders. [...] It may be the greatest bargain on earth. It takes an enormous organization to carry out such a mission. The USPS has 571,566 full-time workers, making it the country's second-largest civilian employer after Wal-Mart Stores. It has 31,871 post offices, more than the combined domestic retail outlets of Wal-Mart, Starbucks, and McDonald's. Last year its revenues were $67 billion, and its expenses were even greater. Postal service executives proudly note that if it were a private company, it would be No. 29 on the Fortune 500. The problems of the USPS are just as big. [They are...] ubiquitous, relied on, and headed off a cliff."

Surely this is an organization and service asset that can be reinvigorated. With more reasonable union agreements, more rational pricing, and competitive and vibrant delivery practices, much more should be possible.
Posted by Joost Bonsen at 16:46