"...owned by the telecommunications company Alcatel-Lucent and has been used for such jobs as part of a project to lay 9,000 kilometres of submarine cable between Sydney and Hawaii. Today, however, the vessel was contracted by the the French aviation accident investigation bureau to recover the wreckage of the Air France passenger jet that crashed in the mid-Atlantic in 2009 on a trip from Rio de Janeiro and Paris." 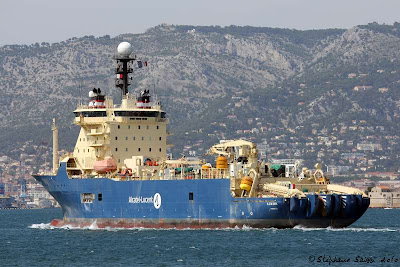 Photos by Stéphane Saissi.
Posted by Joost Bonsen at 12:04