Society without God? ~ Anti-Atheism in USA...

Author of Society without God: What the Least Religious Nations Can Tell Us About Contentment professor Phil Zuckerman and colleague Gregory Pauland write an OpEd piece in the WashingtonPost asking Why do Americans still dislike atheists? Despite substantial progress in cultural awareness and legal protections of many civil rights...

"...there is still a group that lots of Americans just don’t like much: atheists. Those who don’t believe in God are widely considered to be immoral, wicked and angry. [...] 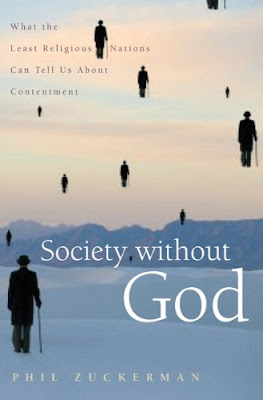 this stunning anti-atheist discrimination is egged on by Christian conservatives who stridently -- and uncivilly -- declare that the lack of godly faith is detrimental to society, rendering nonbelievers intrinsically suspect and second-class citizens. Is this knee-jerk dislike of atheists warranted? Not even close. A growing body of social science research reveals that atheists, and non-religious people in general, are far from the unsavory beings many assume them to be. On basic questions of morality and human decency -- issues such as governmental use of torture, the death penalty, punitive hitting of children, racism, sexism, homophobia, anti-Semitism, environmental degradation or human rights -- the irreligious tend to be more ethical than their religious peers, particularly compared with those who describe themselves as very religious."

Will anti-atheism be the last of the poisonous prejudices and irrational stupidities of mankind?
Posted by Joost Bonsen at 15:03