I have no idea how good it will be, but I'm most definitely a sucker for any MIT yarn, so I'm going to the MIT Museum for the book launch of The Technologists, Matthew Pearl’s new historical thriller, this Tuesday night February 21 starting 6pm. The story is set in...

"Boston, 1868. The Civil War may be over but a new war has begun, one between the past and the present, tradition and technology. [...] shocking disasters cast a pall over M.I.T. and provoke assaults from all sides -- 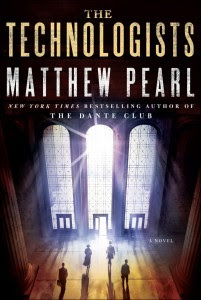 rival Harvard, labor unions, and a sensationalistic press. With their first graduation and the very survival of their groundbreaking college now in doubt, a band of the Institute’s best and brightest students secretly come together to save innocent lives and track down the truth, armed with ingenuity and their unique scientific training. Led by “charity scholar” Marcus Mansfield, a quiet Civil War veteran and one-time machinist struggling to find his footing in rarefied Boston society, the group is rounded out by irrepressible Robert Richards, the bluest of Beacon Hill bluebloods; Edwin Hoyt, class genius; and brilliant freshman Ellen Swallow, the Institute’s lone, ostracized female student. Working against their small secret society, from within and without, are the arrayed forces of a stratified culture determined to resist change at all costs and a dark mastermind bent on the utter destruction of the city."

Watch the terrifying trailer...
Posted by Joost Bonsen at 17:19