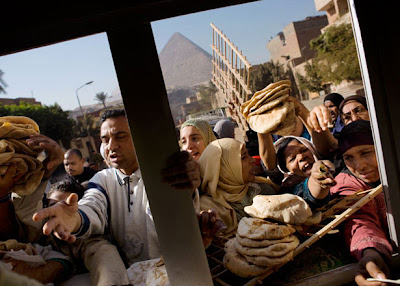 Just picked up the June issue of my favorite monthly magazine, National Geographic, and read The End of Plenty by Joel Bourne Jr (with photos by John Stanmeyer) on the global food crisis...

"Last year the skyrocketing cost of food was a wake-up call for the planet. Between 2005 and the summer of 2008, the price of wheat and corn tripled, and the price of rice climbed fivefold, spurring food riots in nearly two dozen countries and pushing 75 million more people into poverty. But unlike previous shocks driven by short-term food shortages, this price spike came in a year when the world's farmers reaped a record grain crop. This time, the high prices were a symptom of a larger problem tugging at the strands of our worldwide food web, one that's not going away anytime soon."

Bourne then raises the spectre of a "hot, crowded, and hungry world" with a "perpetual food crisis." Faced with this predicament before, he notes that agricultural innovators...

"...helped more than double the world's average yields of corn, rice, and wheat between the mid-1950s and the mid-1990s, an achievement so staggering it was dubbed the green revolution. Yet with world population spiraling toward nine billion by mid-century, these experts now say we need a repeat performance, doubling current food production by 2030. In other words, we need another green revolution. And we need it in half the time."

But with each new invention boosting capacity or supply, the Malthusian condition is for people to breed -- or grow older -- thus pushing demand even higher. Bourne's story spotlights examples of this from several emerging markets. In the end, however, the challenge remains feeding 9 or 10 Billion people by 2050. What truly transformative technologies will make this possible?
Posted by Joost Bonsen at 10:15