Ageing Populations ~ A Greying World by 2050?

The latest Economist has a special report on Ageing Populations ~ A Slow-Burning Fuse spotlighting our increasingly greying world...

"The rich world's population is ageing fast, and the poor world is only a 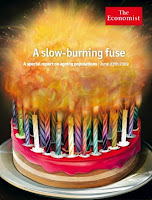 few decades behind. According to the UN’s latest biennial population forecast, the median age for all countries is due to rise from 29 now to 38 by 2050. [...by 2050] in the rich world one person in three will be a pensioner; nearly one in ten will be over 80. This is a slow-moving but relentless development that in time will have vast economic, social and political consequences. As yet, only a few countries with already-old populations are starting to notice the effects..."

There are several key infographics in the article, including this one showing the trendscape of aging over the past 60 and upcoming 40 years...

This is a theme the Economist has touched on before, including their review of the Age of Aging. For those interested in more, the special report's Sources are an excellent reference list. A key set of charts I like are these Health Percentographs (a.k.a. Survivor Plots) showing the percentage of a given cohort still living over a span of ages. Emerging developments relevant here include technologies for Extreme Longevity. And if you like to speculate about what future worlds with healthy elderly people might be like, check out The First Immortal and other SF speculative futures!

(One final point: thanks much to Philips, the consumer health and lifestyle technology global leader, for sponsoring the PDF downloads of this special report. This is a strategically clever move on their part, since Philips is one of the businesses which is best placed to grow serving this new kind of "grey market".)
Posted by Joost Bonsen at 13:48