"India’s cities need at least 25m more homes, according to report from McKinsey, a consultancy, and the Federation of Indian Chambers of Commerce. In Mumbai, the commercial capital, more than 8m people now live in shantytowns, often paying substantial rent for the privilege. 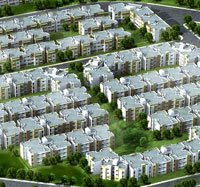 But buying a home of their own is way out of reach for most of them: a 70-square-metre flat in the centre of the city costs $500,000 or so. Matheran Realty is one of several firms that think they have a solution: ultra-low-cost housing. In Karjat, 90km east of Mumbai, Matheran Realty is in the process of building 15,000 flats with prices starting at just 210,000 rupees ($4,500) for 19-square-metre units. Tata, the firm that makes the $2,500 “Nano” car, is building 1,300 basic units at Boisar, about 100km north of the city, and may add more. Priced at 390,000-670,000 rupees each, they are already oversubscribed. Other firms are planning similar developments elsewhere in India."

The article goes on to quote Monitor's Ashish Karamchandani who has been a driving force articulating novel financing and business models for these developments, many of which are described in his Emerging Markets, Emerging Models report. I was delighted to meet him in person when he visited MIT earlier this year in an event organized by TiE-Boston's Raj Melville and Ranjani Saigal. Financial service innovations for the base of pyramid market are a trillion dollar global opportunity area!
Posted by Joost Bonsen at 23:35