Check out piece by MIT professors Abhijit Banerjee and Esther Duflo in Foreign Policy, More Than 1 Billion People Are Hungry in the World, which is excerpted from their book, Poor Economics: A Radical Rethinking of the Way to Fight Global Poverty...

"...the story of hunger, and of poverty more broadly, is far more complex than any one statistic or grand theory; it is a world where those without enough to eat may save up to buy a TV instead, where more money doesn't necessarily translate into more food, and where making rice cheaper can sometimes even lead people to buy less rice. 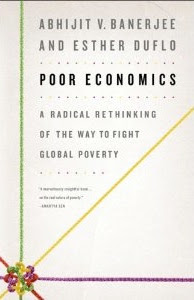 But unfortunately, this is not always the world as the experts view it. All too many of them still promote sweeping, ideological solutions to problems that defy one-size-fits-all answers, arguing over foreign aid, for example, while the facts on the ground bear little resemblance to the fierce policy battles they wage. [...] To find out whether there are in fact poverty traps, and, if so, where they are and how to help the poor get out of them, we need to better understand the concrete problems they face. Some aid programs help more than others, but which ones? Finding out required us to step out of the office and look more carefully at the world. In 2003, we founded what became the Abdul Latif Jameel Poverty Action Lab, or J-PAL. A key part of our mission is to research by using randomized control trials -- similar to experiments used in medicine to test the effectiveness of a drug -- to understand what works and what doesn't in the real-world fight against poverty. In practical terms, that meant we'd have to start understanding how the poor really live their lives."

Read it all! J-PAL is centrally about researching and developing effective facts for humanity! And most definitely get the book.