Libraries Will Die ~ Caldwell in FT on Future Fate 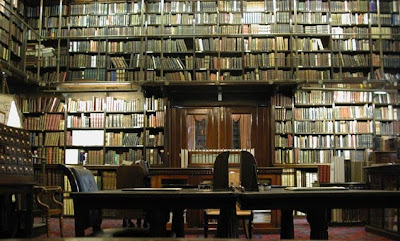 FT's Christopher Caldwell writes It is the fate of libraries to die...

"Libraries belong to a brief transitional period at the end of the 19th century -- after the rise of democracy but before the rise of the welfare state. [...] Such thinking is opposed to the spirit of the computer age. Today, it is considered immoral and inefficient if information does not flow freely from one jurisdiction to another. But, like the military sector, the library sector confounds every attempt to make it more efficient. [...] Modern people often make the mistake of assuming that “cultivation” or “polish” is the important thing libraries give their patrons. It is not. What is important, is that people build a basic toolkit of literary communication that leaves them uncowed by accounts built out of words, sentences and paragraphs."

Caldwell is seriously uneducated about the history of libraries. This quote is probably the most inane thing I have ever read and I pity the author of it deeply. I completely disagree.

Ok, add something to the conversation. Right now your post makes you look like a wanker moron irrelevant librarian. In what way is Caldwell uneducated? Why is the quote inane? In what way do you disagree? You're one post away from being a witt1-less idiot...