The new MIT Media Lab head will be 44 year old Joi Ito, a Japanese intellectual and financial venture capitalist and citizen of the planet. News broken by John Markoff of the NYTimes, who points out...

"...he is neither a conventional Japanese technologist, nor your average college dropout. Raised in both Tokyo and Silicon Valley, Mr. Ito was part of the first generation to grow up with the Internet. 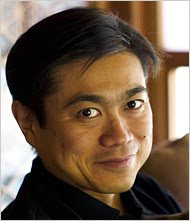 His career includes serving as a board member of Icann, the Internet’s governance organization; becoming a “guild master” in the World of Warcraft online fantasy game; and more than a dozen investments in start-ups like Flickr, Last.fm and Twitter. In 1994 he helped establish the first commercial Internet service provider in Japan. He was also an early participant in the open-source software movement and is a board member of the Mozilla Foundation, which oversees the development of the Firefox Web browser, as well as being the co-founder and chairman of Creative Commons, a nonprofit organization that has sought to create a middle ground to promote the sharing of digital information."

This is super exciting. Were you at the launch, Joost?