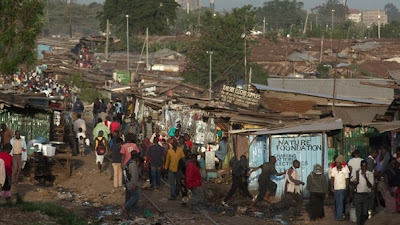 
"Africa’s biggest slum, it is home to perhaps a million people. Nobody knows for sure, since Kibera is left to its own devices. Government is absent: it offers the residents (regarded as squatters) no services, opens no schools, operates no hospitals, paves no roads, connects no power lines and pumps no water into homes. And yet Kibera, wedged in between ornate embassies and a well-tended golf course, is an integral part of Nairobi [...] Kibera’s origins are Western. A century ago British colonial rulers gave small plots of land on the edge of Nairobi to Nubian soldiers serving in the King’s African Rifles. They built mud huts [...] The land was later nationalised but the Nubians stayed put and rented parts of it to newcomers. Today most homes are made of ragged tin and reused timber. [...] Kibera is a thriving economic machine. Local residents provide most of the goods and services. Tailors are hunched over pedal-powered sewing machines. Accountants and lawyers share trestle tables in open-air offices. Carpenters carve frames for double beds along a railway line. Whole skinned cows hang in spotless butcher shops. [...] Life in Kibera can be harsh. Disease is rife, food is short for some, and death can come suddenly. [...] The key to making it in Kibera is access to capital. A market of one million potential customers crowds in on entrepreneurs, but raising the money to start a business is hard. Most banks won’t lend to them because they have no collateral, perhaps not even a fixed address. Those who manage to borrow face high interest rates. [...] Kibera may be the most entrepreneurial place on the planet. Residents have no choice but to look after themselves."

Inspiring resilience. And yet further evidence that we need more inclusive innovations and beneficial slum solutions.
Posted by Joost Bonsen at 13:45