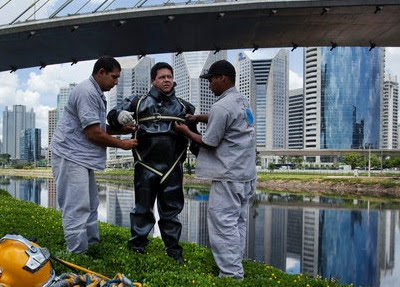 Simon Romero writes in the NYTimes of A Willing Explorer of São Paulo’s Polluted Rivers...


"The Tietê and Pinheiros Rivers, which cut through this metropolis of 20 million, flow well enough in some parts. But in certain stretches, they ooze. Their waters are best described, perhaps, as ashen gray. Their aroma, reminiscent of rotten eggs, can induce nausea in passers-by. José Leonídio Rosendo dos Santos has been diving into both rivers for more than 20 years. Hired largely to unclog drainage gates, he scours the murky depths of the Tietê and Pinheiros, which have symbolized São Paulo’s environmental degradation for decades, bringing to the surface a list of items that is eerie and bizarre. [...] Part of the fascination with Mr. dos Santos has to do with how Paulistanos view their rivers. [...] it was adored by city residents as recently as the middle of the last century, when they fished, swam and held rowing competitions in its waters. Then São Paulo rapidly expanded to become one of the world’s largest cities, its residents moving into high-rise buildings, gated enclaves and sprawling slums. Factories deposited their waste in the rivers. Flourishing districts in São Paulo’s metropolitan area expanded without basic sanitation systems, discharging sewage directly into the Tietê and Pinheiros. The rivers now persist in Brazil’s popular culture as dystopian objects of derision. [... Still there is] hope that the stubborn presence of life along São Paulo’s rivers might reflect the latest phase in their existence: the attempts to resurrect them. Since 1992, the authorities have been advancing with a painstakingly slow project to clean up the Tietê and Pinheiros."

See also a piece from the Economist on Cleaning up an urban sewer.
Posted by Joost Bonsen at 18:07