CSMonitor cover story Troubled Waters by William Wheeler asks Global water crisis: too little, too much, or lack of a plan?


"The global water crisis -- caused by drought, flood, and climate change -- is less about supply than it is about recognizing water's true value, using it efficiently, and planning for a different future, say experts. [...] Water is a part of everything we do: It feeds crops, powers cities, cools computer servers, and is key to the manufacturing of everything from clothes to cars. The billion more people expected on the planet by 2025 will increase water demand for all of those functions. And just to feed those people, water withdrawals for agriculture are expected to increase by about half. But it's not only about the additional mouths to feed; it's also the growth of new appetites. Much of the growth in demand will emerge from the swelling sprawl of bustling, slum-pocked metropolises across the developing world. For the first time in history, the share of the global population living in cities recently surpassed 50 percent -- on its way to 75 percent expected by 2050." 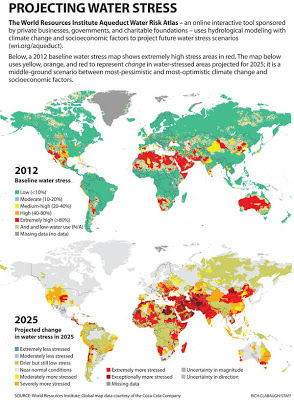