40 years ago Dennis Meadows and colleagues built upon the World Dynamics model of MIT's Jay Forrester and published The Limit to Growth about computer model simulations of global dynamics to explore the macro-possibilities of humanity on earth and study the "Predicament of Mankind." Just a few weeks ago, the Volkswagen Foundation sponsored a workshop asking whether we are Already Beyond? -- 40 Years Limits to Growth. And the Smithsonian's Mark Strauss writes Looking Back on the Limits of Growth, asking...


"Forty years after the release of the groundbreaking study, were the concerns about overpopulation and the environment correct? Recent research supports the conclusions of a controversial environmental study released 40 years ago: The world is on track for disaster. So says Australian physicist Graham Turner, who revisited perhaps the most groundbreaking academic work of the 1970s, The Limits to Growth." 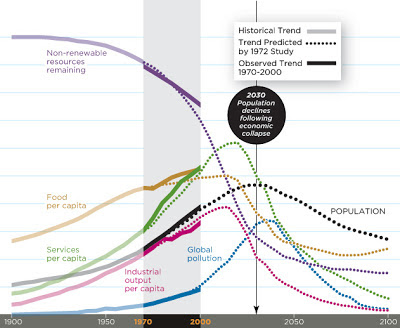 Finally, Der Spiegel's Markus Becker interviews Meadows who says Humanity Is Still on the Way to Destroying Itself...

"...we are going to evolve through crisis, not through proactive change. [...] The fact that the collapse hasn't occurred so far doesn't mean it won't take place in the future. There is no doubt that the world is changing, and we will have to go along with it. There are two ways to do that: One is, you see the necessity of change ahead of time and you make the change, and the second is that you don't and are finally forced to do it anyway. [...] the geological record clearly shows that the global temperature doesn't increase in a linear way. It jumps. If that happens, a collapse will occur. But it would be nothing new, of course. Societies rise and fall. They have been doing so for 300,000 years."