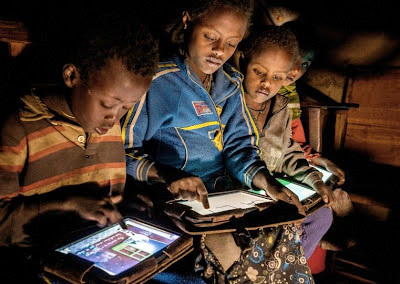 
"The children in Wenchi have no opportunity to attend school, because the nearest school is too far away or their parents prefer to send them out to fetch water or into the fields, where they watch the cows in the morning and the goats in the afternoon. But what if these children, who, like their parents, can neither read nor write, were provided with a computer? And if the computer were loaded with learning programs, films about animals and faraway countries, arithmetic games, in both English and Amharic, Ethiopia's official language? And if the children were simply allowed to do as they please, in the hope that they would teach themselves and learn from each other? Could this approach enable developing countries to make the leap into the information age? Or would the tablets end up in the dust just as quickly as children's toys end up in the garbage in the West when they cease to be new and exciting? If the experiment were a success, could the same approach be used to help 100 million children worldwide, children who don't go to school because they live in rural areas or their families are too poor? [Could it be] that all you have to do is give children a computer, and that everything else will fall into place. "Children are autodidacts [...] they don't have to be taught to walk and speak, either." [If this] project succeeds, it will be a veritable revolution, one that could put an end to the plight of uneducated children and help bridge the gap between rich and poor."

I hope this is replicable elsewhere. Also, when I first heard of the OLPC $100 laptop design & deploy effort, I said "nevermind laptops, let's deploy one mobile per minor." By using cheap Android tablet-smartphones, that's now finally happening. Nice!
Posted by Joost Bonsen at 01:28