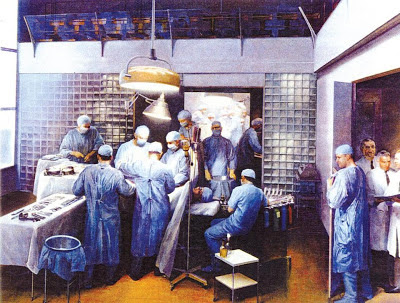 Diane Speare Triant writes in today's Sunday Globe about The miracle of medicine spotlighting the historic first successful kidney transplant surgery at the Brigham in Boston back in 1954. Beyond the groundbreaking scientific, engineering, and medical essentials of this achievement is the bizarre backstory where the really anti-progress faith-freak majority was amazingly beaten by another faction of the religiously faithful, just one a bit less irrational...


"Many felt that subjecting [donor twin] Ronald, a healthy person, to a major operation not for his benefit was a breach of the Hippocratic Oath’s promise to do no harm. There were public outcries that the transplant team would be “playing God.” People compared Murray to Dr. Frankenstein. Yet Murray, a devout Christian, believed he was simply working with the tools God had given him, following a human inclination to be curious and persistent. Since he also felt a deep responsibility to address society’s concerns, he immersed himself in dialogue with Boston’s religious leaders. “We had conferences in the hospital,” he said. “We had the cardinal; we had a leader of the Jewish faith. We wanted to get the consensus.” Murray’s inclusive approach eventually won a special decree allowing the surgery from the state’s highest court."