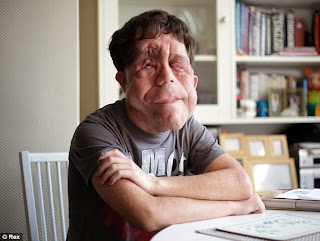 
"My genetic condition, neurofibromatosis, causes excess body tissue and non-cancerous tumours. [...] As a teenager, I was called Elephant Man, Scarface and Quasimodo. All three of these film characters with a scar, mark or illness is either a victim or psychotic killer. I could probably act the part, but in real life I am neither of these things. It’s all about context. [...] What I hope I can do is help to create a society where grown-ups don’t hold these immature, naive prejudices."

Towards this end, Adam supports Changing Faces and the Face Equality campaign...


"...calling for balanced portrayals of people with disfigurements in films. [...] James Partridge, CEO of Changing Faces, said: “We’re so used to seeing people with disfigurements portrayed as the villain in films that it may be hard for people to imagine they could ever play someone’s friend, the Dad picking up his kids from school, the US President, or a lover. [...] “The problem is that, for those who actually do have facial scars or whose faces are asymmetrical as a result of cancer, strokes or birth conditions, the way that people react in the cinema can spill over into the way they are treated in everyday life. It can encourage people to make moral judgements based on what they see on the screen."

Here's the short film Leo to provoke thought... What did you think was going to happen?
Posted by Joost Bonsen at 21:01