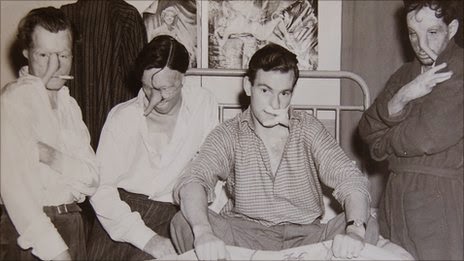 WWII airmen with terrible injuries were cared for by remarkable plastic surgeon, the New Zealander Sir Archibald McIndoe, who pioneered modern reconstructive surgery through bold but careful experimental methods at the Queen Victoria Hospital in East Grinstead, England.  The injured were "human guinea pigs" and proud of it.  With McIndoe's encouragement, these men formed an exclusive drinking club which endures even now, nearly three-quarters of a century later.  The Guardian's Lucinda Marland shares some of their stories.  And the BBC's Nick Tarver writes in 2011 as East Grinstead 'guinea pigs' celebrate 70th anniversary...


"According to the Guinea Pig Club's honorary secretary, Bob Marchant, who worked with the surgeon in the 1950s, it was his focus on young men's future lives, which paid dividends. "He not only treated them for burns, but also psychologically by getting them back into the community," he said. "There were a lot of wealthy people around here and McIndoe went out and asked them to invite the airmen into their homes. He also did the same in the pubs. "Eventually East Grinstead became known as the town that didn't stare."

Amazing and holistic healing innovations... Finally, 60 Minutes catches up with two Australian "Guinea Pigs" who met during recovery and are still best mates after all these years!
Posted by Joost Bonsen at 15:42