Steph at WebUrbanist spots that Norway's Trampe has been reengineered and rebranded as the CycloCable...


"Trampe is the world's first bicycle lift intended for urban areas. The prototype was built in 1993. During its 15 years of operation, Trampe pushed more than 200,000 cyclists up the 130m long hill Brubakken in Trondheim. Already from the beginning, it became one of the most popular tourist attractions."

The creation and venture escalation story is compelling...


"The inventor of the Bicycle Lift [...] Jarle Wanvik, is a true bicycle enthusiast. He always finds an excuse for parking his car and using his bicycle instead. [...] In 1992, Wanvik got luminous visions about a bicycle lift that could carry cyclists uphill. Inspired by the ski lift technology, he visualized a lift design by which the cyclists could be pushed uphill without having to descend the bicycle. [...] Wanvik joined forces with the experienced mechanical engineer Stein Løvold and the electrical engineer Magnar Wahl. The local ski lift manufacturer, Protek AS, was picked to manufacture and assemble the world’s first bicycle lift. More than 2.000 people enjoyed the opening ceremony of Trampe on August 18 1993. 15 years and 220.000 trips later it was time to renew the lift. In 2010, the POMA GROUP contacted Design Management AS. After having tested Trampe they asked for a worldwide license. The license agreement was signed on the July 22 2011. Trampe had been authorized by DNV (Det Norske Veritas) in 1994. However, in spite of no accidents during 15 years of operation, International Cableway authorities claimed a more secure design for the next generation of lifts. The answer was CycloCable, a new bicycle lift developed by SKIRAIL (a company member of POMA GROUP), and Design Management AS. CycloCable is based upon the same patent as Trampe but with new, retractable foot plates. The CycloCable in Trondheim is the very first installation of its kind, so Trondheim keep on being the true pioneer of bicycle lifts." 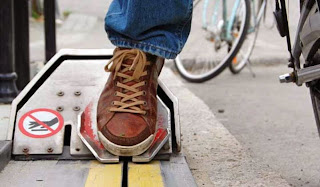 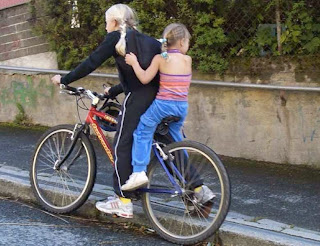