"Dahlberg proposes creating a massive gap of water and air. By slicing a huge section of the island's landmass away, he would create a steep fjord through the site where the shooting occurred -- a void that he describes as "a wound or a cut within nature itself." [...] Rather than building a monument or structure, he would focus on nature itself. A 70-foot-wide gap carved out of the island, separating the headland from the main island, would serve as the ideal spot to reflect and memorialize. On the jagged edges of the cut, the names of those who died in the attacks would be inscribed into smooth stone." 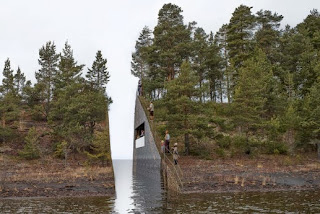