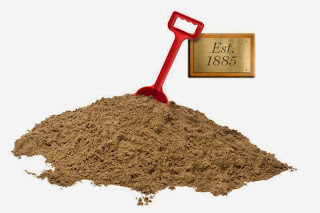 Ruth Graham writes in the Globe about the future of play, How the American playground was born in Boston...


"As children’s play spaces evolve, the spirit behind the original 19th-century “sand garden” is on the rise again. [...] in 1885, one charitable group decided to offer something of an experiment to the local children: a pile of sand, deposited for the summer in the yard of a chapel on Parmenter Street. Little did any of them know how much it would change the experience of childhood in America. [...] The spot -- across the street from what is now the North End public library branch -- was an immediate hit with children, who spent long afternoons digging with small shovels and making sand pies. [...] Today, playgrounds look nothing like that simple sandpile. Over the next century, playgrounds were filled in with dangerous but thrilling monkey bars, swings, see-saws, and metal carousels, all on beds of dirt or asphalt. Then, starting in the 1980s, a new trend began, in which these sometimes rusty and risky structures were replaced by standardized plastic structures, the asphalt giving way to rubber matting. Modern playgrounds have become so predictable, cushioned, and programmed that they are now coming under attack as a symptom of everything that’s wrong with contemporary childhood. [...] The most ambitious play thinkers argue that the ultimate goal should be returning the places we live -- or at least neighborhoods -- to kids. [...] Not all opportunities for play, in other words, need to be look like playgrounds. They don’t necessarily need to be permanent, expensive, or complicated. As Johnson puts it, “We ought to have play that comes and goes. We ought to dump some sand piles in the summer.” What people thought children wanted in the 1880s, it turns out, might be the same thing they want today."

Here's just a couple of the Globe's archival playground pictures! 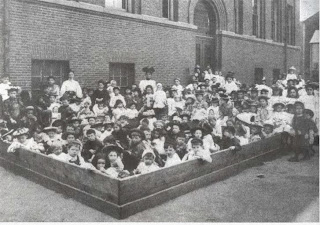 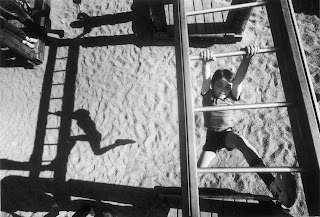