"It is a danger hidden beneath the streets of New York City, unseen and rarely noticed: 6,302 miles of pipes transporting natural gas. [...] The perilous state of New York City’s underground network, one of the oldest in the country [is] a glaring example of America’s crumbling infrastructure. [...] Communities across the country have been struggling to replace thousands of miles of these old, metal pipes with pipes made of plastic or specially coated steel that are less prone to leakage. Few, however, face as daunting a challenge as New York City. To replace all of the old mains in its network right now would cost as much as $10 billion, Con Edison estimates. Much of that expense would fall on the residents and businesses that use the gas for heating and cooking. [...] “Some of this aging infrastructure has reached the end of its useful life” [...] “It’s a major ordeal in a city like New York to just start digging things up.”

Yikes, surely there's a better way to design, build, and maintain cities?! Here's the mess below as visualized by Larry Buchanan's infographic and Robert Stolarik's photos... 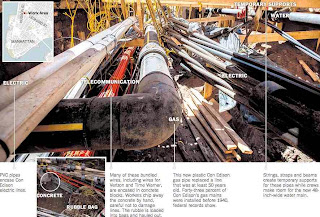