Ever since encouraging Dave Danielson to found the MIT Energy Club -- and later asking him to collaborate with me and run the very first EnergyNight at the MIT Museum -- FYI, another one's coming up...

...I've become increasingly interested in the broad energy landscape worldwide (and, of course, in innovations here at the Institute). And since I co-instruct the MIT Development Ventures class offering, I have an extra awareness of the energy challenges of emerging markets, primarily for those people in off-grid situations. So I'm pleased the MIT Energy Initiative has hired Rob Stoner to spearhead efforts in developing countries -- but more on that later. What's been most interesting for me to come to appreciate, however, is the huge role that LPG has played -- and will increasingly play -- in the global energy mix. LPG or Liquefied Petroleum Gas are typically a blend of Butane and Propane and have hundreds of uses from cooking, transportation, heating, refrigeration, and more. The World LP Gas Association (WLPGA) is a particularly useful infosource -- I especially like this distribution chain poster they provide... 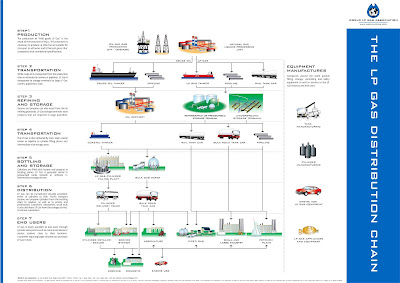 The WLPGA spotlights sustainable development & rural use as well, 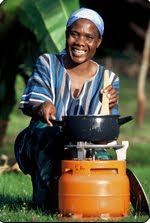 but my first introduction to LPG was from the MIT students on the C3BioEnergy startup team which proposed a process to convert agri-feedstocks into LPG. At around the same time, I heard again from MIT alums

Sam and Alex, co-founders of Lilliputian Systems, of their porta-power micro-fuelcell systems using, yes, cartridges of Butane/LPG, kind of like cigarette lighters but instead for powering laptops and mobiles. Finally, I was very interested to meet the folks from

high-end hiking gear supplier Jetboil when they spontaneously visited MIT for the kickoff of the MIT Yunus Challenge in 2007-8 to address Indoor Air Pollution. Jetboil uses an LPG mix to fuel their FluxRing-enabled pots, a more efficient cooking system...

The company execs came to MIT because they too wanted to figure out how to apply the essence of their technology to a developing country context. With such diversity of feedstock, from petroleum to plantoleum, and with an inherently containerized, gridless distribution channel, LPG seems like a rather versatile and still underappreciated fuel for developing country customers.
Posted by Joost Bonsen at 20:52