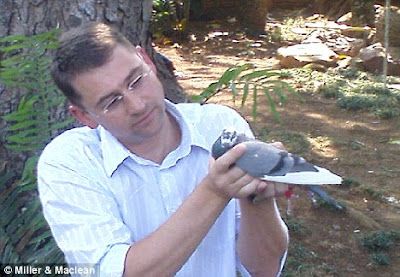 Thanks to Jose Gomez-Marquez for spotting (via Hack A Day) Emily Miller's DailyMail story Firm Enlists Winston the Homing Pigeon to Transfer Data -- Because He's Faster than Broadband...

"IT experts at a firm in South Africa said it takes up to six hours to transfer four gigabytes of encrypted data between two of its offices which lie 50 miles apart. Today staff at the financial services company will save valuable time by instead having the information transported by a homing pigeon named Winston."

Hilarious! And reminds me of the DonkeyNet idea -- proposed my MIT Media Lab colleagues as a low-cost drive-by WiFi -- something commercialized by our Development Ventures alumco FirstMileSolutions / United Villages!
Posted by Joost Bonsen at 01:34