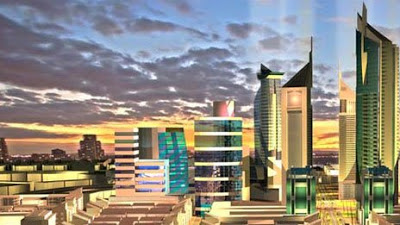 
"Kenya's president has launched a $14.5bn (£9.1bn) project to build a new city intended to be an IT business hub and dubbed "Africa's Silicon Savannah". It will take 20 years to build Konza Technology City about 60km (37 miles) from the capital, Nairobi. [...] Konza is part of the government's ambitious Vision 2030 initiative to improve much-neglected infrastructure over the next 18 years. [...] The 5,000-acre (2,011-hectare) site was a ranch to the south-east of Nairobi on the way to the port city of Mombasa. [...] The city wants to attract business process outsourcing, software development, data centres, disaster recovery centres, call centres and light assembly manufacturing industries. A university campus focused on research and technology as well as hotels, residential areas, schools and hospitals will also be built. The government has appointed the Konza Technopolis Development Authority to oversee the building of the IT hub, which will be built in four phases -- starting with the technology centres first."


"The groundbreaking of the Konza Technopolis Park on Wednesday is set to boost the profile of Kenya as a regional business hub with more than 250 foreign and local firms already lined up to invest in the $10 billion (Sh840 billion) project. [...] Among the 18 firms that want to invest immediately are the leading mobile phone firm Safaricom, which intends to put up a data centre, Samsung Electronics which he said will put up an assembly plant, and Huawei of China. The multi-billion-shilling ICT Park is hinged on a private-public partnership financing model where the government has offered land and is building infrastructure such as electricity, water rail and roads. The private sector on the other hand is expected to put up investments in various industries such as in business process outsourcing (BPO) ventures, a science park, shopping malls, hotels, international schools and health facilities." 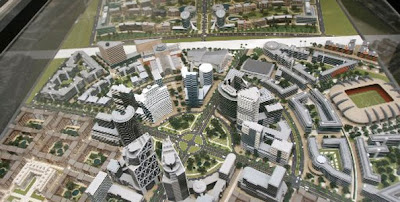