I've been thinking about inspiring media recently, especially how great stories with heroes and heroines resonate with an audience and provoke them onwards or in better directions. Few television shows have had greater impact in this regard than Star Trek: The Original Series and the SF crew of a future USS Enterprise. Whether Spock and his logic, or Bones with his bedside manner, or Scotty with his can-do engineering spirit, the characters -- and their ensemble of future-world, multi-ethnic collaboration and competency -- really struck a chord with many viewers. Of these all, one of the most remarkable was the presence and role of Uhura... 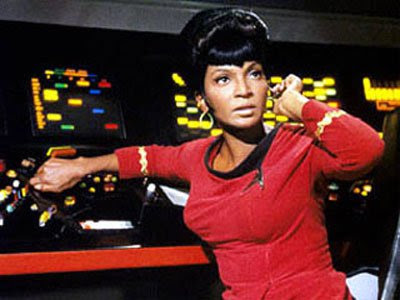 Here actress Nichelle Nichols describes how she and creator Gene Roddenberry came up with her character's name... ..."Uhura" -- the feminine spin on "uhuru" which is Swahili for "freedom" -- and also helped shape the backstory for her character who would come from a future United States of Africa! Nichols next reveals her decision to quit the show prematurely... Wow, talked out of it by her "biggest fan" -- no less than Martin Luther King! The show also cracked through the self-censorship of American television of that time by portraying the first inter-racial kiss... ...and pioneering all kinds of costumes and alternative-worlds!-)
Posted by Joost Bonsen at 00:00