Exactly 150 years ago today -- January 1st 1863 -- President Abraham Lincoln signed the Emancipation Proclamation declaring slaves in Confederate (rebel) territory free. It was by no means the end of all slavery and certainly not of discrimination, but nevertheless this was an epic turn of events!  It would take decades more overcoming Jim Crow laws, striving for access, and fighting for civil rights to achieve a real measure of equality, but this event was a transformational cusp. Writes Janell Ross in HuffPost...


"Lincoln was not the lone force behind emancipation but rather an essential part of a coalition of outspoken abolitionists that included free blacks and whites, said Lonnie G. Bunch III, director of the Smithsonian's National Museum of African American History and Culture and one of the curators of the Smithsonian’s 150th Emancipation Proclamation anniversary exhibit.  [...] "When you understand that freedom was a process, not a moment, then you can allow yourself to wonder what work is left for us in the next 100 years."

There's more work to be done, but at least we can see the artifacts of emancipation at the Smithsonian! 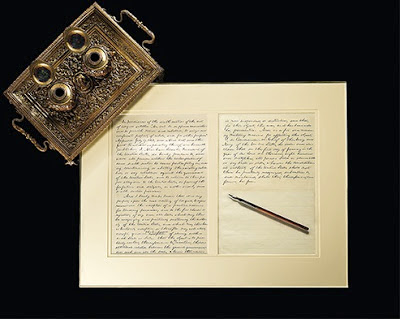