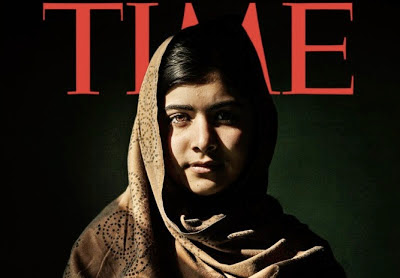 My own 2012 TIME Person of the Year would have been the übercourageous Malala Yousafzai. Together with HuffPost's Joanne Bamberger, I'm quite disappointed US President Obama was picked as the populist favorite instead of...


"...the Pakistani schoolgirl who was shot and almost killed for defying the Taliban in her outspoken advocacy for girls' education. [...] Not only did she show almost unheard of courage in the face of almost-certain physical violence against her by speaking out about educating girls in Pakistan, she has raised awareness about the issue of violence against girls and women all over the world -- an epidemic that few seem focused on."

I can scarcely think of a more important issue planet-wide than supporting women and girls-rights, most especially to equal and complete education. The many faith-freak religious wingnuts who fight against and prevent this must be expunged from power.
Posted by Joost Bonsen at 20:46