KSA, the Kingdom of Saudi Arabia, are perhaps the most ambitious of the global governments in pursuing gigaprojects -- Economic Cities, Landbridges, Universities, and other Big Infrastructure investments of sovereign wealth. (At least on the per-capita basis; China and Dubai and Singapore are also strong contenders, but of different scales.)

Saudi Economic Cities are spearheaded by SAGIA, the Saudi Arabian General Investment Authority. These cities are in the northwest, southwest, and center-east of the country, with the biggest being KAEC, the King Abdullah Economic City north of Jeddah, located on the central-west of KSA on the Red Sea. 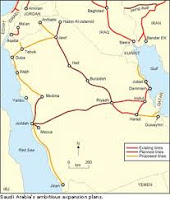 The Saudi Landbridge is a rail-link cutting from Riyadh west to Jeddah, and is the beginning of a grand rail-network plan, including a modernized Hejaz Railway from Tabuk in the north down south to Medina and beyond, ultimately to at least Jizan (and perhaps to a Yemen-Djibouti bridge-tunnel).

Human capital development is perhaps even more important than physical infrastructure, and it is toward this goal that the Saudi's are investing in universities, most visibly KAUST, the King Abdullah University of Science and Technology north of Jeddah on the Red Sea.

Big Infrastructure in KSA includes the Egypt-Saudi bridge across the Tiran Strait spanning the Gulf of Aqaba. This would be a direct link to Sharm el-Sheikh and, through the Sinai & across the Suez to Cairo, Alexandria, and beyond. 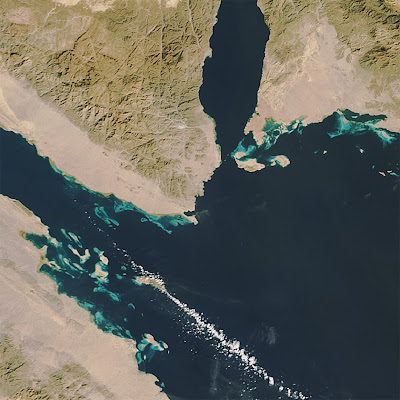 I would further argue that the proposed link between Yemen and Djibouti -- backed in part by Yemeni-Saudi-led Bin Laden Group -- is also Big Infrastructure relevant to KSA since it connects a billion Africans to the MENACA region & beyond... All of these are key elements to bringing prosperity to the broad mass of arabs & expats in the region and empowering entrepreneurial action pervasively.
Posted by Joost Bonsen at 20:39