Very interesting to see in the latest Economist about the Greying Globe, a review of The Age of Aging: How Demographics are Changing the Global Economy and Our World by George Magnus. Among other things...

"Thanks to a combination of growing longevity and falling birth rates, the average age of populations, first in the world’s rich countries and, after a time lag, in emerging nations too, has been rising inexorably. By 2050 the world will have about 2 billion people aged over 60, three times as many as today. In parts of the rich world, mainly Japan and western Europe, that age group already makes up nearly a quarter of the population. By 2050 their share will rise to 30-40%, and even in the—much younger—developing world it will go up to 25-30%." 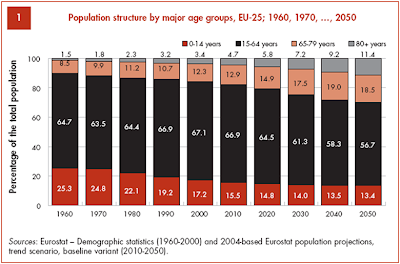 I think this underestimates both the total number of people and the elderly fraction -- mainly because longevity technologies -- or gerontech -- will reduce the death rate and thus shift survival curves dramatically.
Posted by Joost Bonsen at 22:05