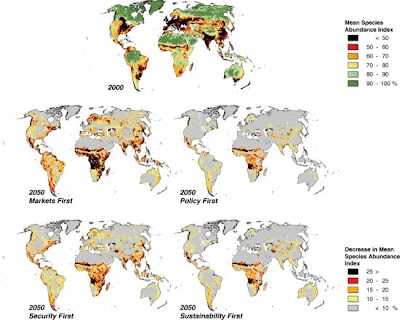 Eye-opening to find these projections of biodiversity loss from 2000 to 2050. This is speculation, of course, but produced by the GLOBIO consortium. They mapped several scenarios...

"The greatest losses are seen in Markets First, followed by Security First, Policy First and Sustainability First for most regions. Africa, and Latin America and the Caribbean experience the greatest losses of terrestrial biodiversity by 2050 in all four scenarios, followed by Asia and the Pacific. The differences among the regions are largely a result of broad-scale land-use changes, especially increases in pastureland and areas dedicated to biofuel production. The overall changes in terrestrial biodiversity though, are influenced by a number of other factors, including infrastructure development, pollution and climate change, as well as public policy and conflict."

More details at UNEP.
Posted by Joost Bonsen at 16:53