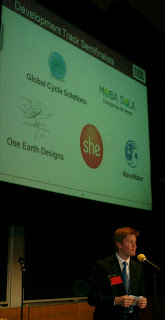 Excellent to see the Semifinalist announcement last night at the MIT $100K Entrepreneurship Competition. This entirely student-run Competition has...

"...facilitated the birth of over 85 companies with aggregate exit values of $2.5 billion captured and a market cap of over $10 billion. These companies have generated over 2,500 jobs and received $700 million dollars in Venture Capital funding."

Lots of worthy ideas generally this year, but I want to spotlight the Development Track (or D-Track) especially as announced by MIT Sloan MBA student Carter Dunn, the track leader. Out of the two dozen entrants to the Track, five teams advanced forward to the Semifinals...
Plus there were at least a dozen additional ventures which were in other Tracks but are really also transformative Development Ventures, including these three Semifinalists!
Congratulations to all!
Posted by Joost Bonsen at 15:21