"The effects of space weather on modern technological systems are well documented in both the technical literature and popular accounts. Most often cited perhaps is the collapse within 90 seconds of northeastern Canada’s Hydro-Quebec power grid during the great geomagnetic storm of March 1989, which left millions of people without electricity for up to 9 hours. This event exemplifies the dramatic impact that extreme space weather can have on a technology upon which modern society in all of its manifold and interconnected activities and functions critically depends."

Here's a map of the speculated impact of a severe geomagnetic solar storm on US electric power grid infrastructure... 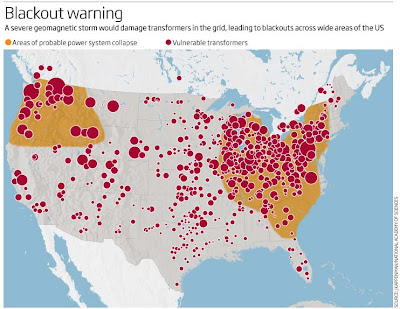 And here's a timelapse of Coronal Mass Ejection, the causal source behind solar storms... This is but one of the many Global Catastrophic Risks as surveyed by works compiled by editors Nick Bostrom and Milan Cirkovic.
Posted by Joost Bonsen at 15:08