Inhabitat's Olivia Chen sums up the recent GreenerGadgets conference in her post Greener Gadgets Buzz From Around the Web. 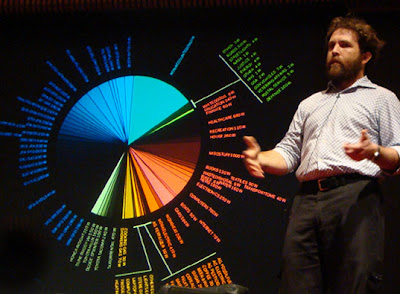 "...narrowly focusing on one ingredient of "going green" means missing the larger environmental picture. A carbon footprint calculation alone is not enough. It's not nearly enough. What about toxins released into the environment? What about water consumption, or waste? Energy consumption? If we nail it on recycling but not on environmental hazards, for instance, we release "a litany of horrors."

Inhabitat's Jill Fehrenbacher in her GG09 summary adds additional elements, including the...

"...need to create ‘Heirloom Gadgets’, and foster a culture of maintenance and repair of existing electronics, rather than constantly upgrading and replacing cheap electronics every year. Hearkening back to a time when there were watch repair shops everywhere, people held on to their watches for years and even passed them down to their grandchildren, Saul Griffith suggested we change the name of the conference to ‘Greener Electronic Objet D’Art’, and focus our efforts on creating BETTER, longer-lasting products that people will form emotional attachments to and will want to keep for years."