TransMilenio ~ Celebrating The Buses of Bogotá

Very interesting NYTimes article by Elisabeth Rosenthal on Buses May Aid Climate Battle in Poor Cities, plus accompanying photogallery and video piece on the The Buses of Bogotá about the TransMilenio, the Colombian capital's Bus Rapid Transit system which moves millions each day along dedicated road lanes... 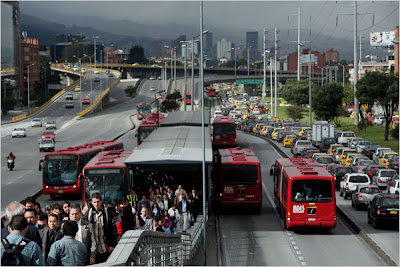 The buses are clean, bright, and the newest additions are long and articulated. The system is said to run and feel much like a tram, but with much lower up-front capital cost.

One especially cool feature is that key stations on TransMilenio routes have plentiful bicycle parking facilities and thus connect a big network of bike paths and walkways making it attractive for customers who would have otherwise used private wheels. Green cities champion and former Bogotá Mayor, Enrique Penalosa, helped start the system in the first place and now helps spread the concept to other cities.
Posted by Joost Bonsen at 11:24