Karen Kaplan in the LATimes writes Permanent Diet May Equal Longer Life about the role of caloric restriction on various health metrics. See here the rhesus monkey on the left has been on a reduced-calorie food regimen, the one on right on a "normal" diet... 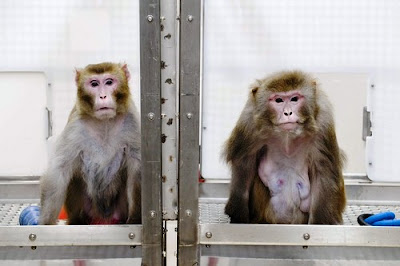 "In the new study, scientists tracked 76 adult rhesus monkeys from the Wisconsin National Primate Research Center starting in 1989. Half the animals were fed a typical diet of lab chow, and the rest got a version with a higher concentration of vitamins and minerals to make up for the 30% reduction in chow quantity. Over the course of the study, the monkeys that ate the regular diet were three times more likely to die of an age-related disease than their counterparts on caloric restriction. Fourteen deaths in the control group were attributable to age-related diseases, compared with five such deaths among the animals that ate 30% fewer calories, according to the study. The rates of cardiovascular disease and pre-cancerous cell growths were twice as high in the control group compared with the reduced-calorie group. The researchers also noted that although five of the control monkeys became diabetic and 11 were classified as pre-diabetic, all the calorie-restricted animals remained diabetes-free."

The devilish thing here is that it's tasty to eat the bad stuff and the good stuff seems like rabbit food. Changing from my blubber-building lousy diet to something healthy is going to require going hungry and changing a lot of bad habits. Ugh.
Posted by Joost Bonsen at 09:22

The monkey on the left does not look like a happy monkey. He looks like a prisoner of war. Will he actually live 5 years longer than his colleague, or will it just seem that way to him? Surely there must be a happy medium.

Besides, both of the monkeys were fed "lab chow" -- not fresh fruit, bark, bugs, rodents, leaves, etc. of their highly varied natural diet.

! Happy? They are both living in cages. I think it's hard to tell quality of life from looking at this photo.

The study just concentrates on lifespan. Luckily you have more control over you life - and you eating habits.