Towards Type I ~ Next Up On Kardashev's Scale

I wrote last year circa Yuri's Day about Nikolai Kardashev, creator of the Kardashev Scale...

"...a general method of classifying how technologically advanced a civilization is. [...] The scale has three designated categories called Type I, II and III. These are based on the amount of usable energy a civilization has at its disposal, and the degree of space colonization. In general terms, a Type I civilization has achieved mastery of the resources of its home planet [~1016 Watts], Type II of its solar system [~1026 Watts], and Type III of its galaxy [~1036 Watts]."

Thinking recently about Giant Leaps helping us get well Beyond Our Cradle has got me thinking how fast we might advance from today's guestimated Type 0.72 towards Type I... 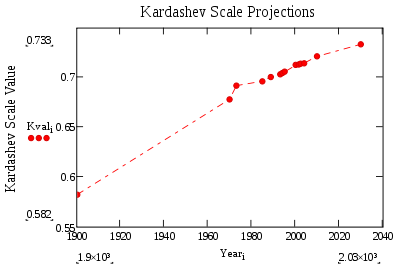 At the same time I'm quite sympathetic to the notion that energy consumption is not a particularly holistic measure of civilizational vitality, especially given the mistaken notion that boosting efficiency per capita would lower this metric of advancement. Plus I should hope that we want to use technological innovations and ecosystems engineering to minimize the chance we anthropogenocide our Earthly environment. It would be rather worse than ironic to achieve Type I by effectively choking and denuding and despoiling our way there!
Posted by Joost Bonsen at 15:33