"The key question to be asked is why most Egyptians choose to remain outside the legal economy? The answer is that, as in most developing countries, Egypt's legal institutions fail the majority of the people. Due to burdensome, discriminatory and just plain bad laws, it is impossible for most people to legalize their property and businesses, no matter how well intentioned they might be. [...] Without clear legal title to their assets and real estate, in short, these entrepreneurs own what I have called "dead capital" 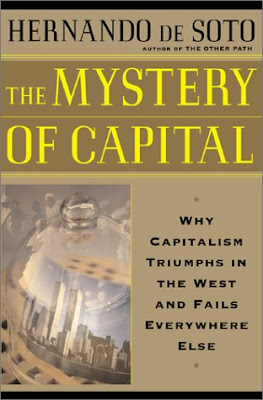 -- property that cannot be leveraged as collateral for loans, to obtain investment capital, or as security for long-term contractual deals. And so the majority of these Egyptian enterprises remain small and relatively poor. The only thing that can emancipate them is legal reform. [...] Bringing the majority of Egypt's people into an open legal system is what will break Egypt's economic apartheid. Empowering the poor begins with the legal system awarding clear property rights to the $400 billion-plus of assets that we found they had created. This would unlock an amount of capital hundreds of times greater than foreign direct investment and what Egypt receives in foreign aid. Leaders and governments may change and more democracy might come to Egypt. But unless its existing legal institutions are reformed to allow economic growth from the bottom up, the aspirations for a better life that are motivating so many demonstrating in the streets will remain unfulfilled."

Of course, de Soto's point can be generalized to the several billion people planet-wide living under similarly stagnant conditions.
Posted by Joost Bonsen at 23:38