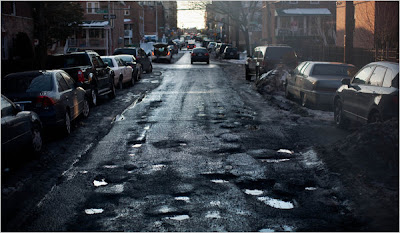 In the NYTimes, Corey Kilgannon is On Patrol for the Casualties of Potholes...

"With melting snow, road salt and snowplows teaming up to assault the roadways since late December, many street surfaces are crumbling and becoming pockmarked with potholes. As fast as the city fills them, new ones open up -- little roadside craters that can cause untold damage to vehicles. And if those vehicles happen to be in the East Bronx, their drivers may encounter Mr. Cruz, a tow truck driver who patrols that territory. “New York is Pothole City right now,” Mr. Cruz said. “Everyone is driving through an obstacle course. These streets will take your car away in a heartbeat.”

Third world infrastructure. Should not be this way...
Posted by Joost Bonsen at 23:34