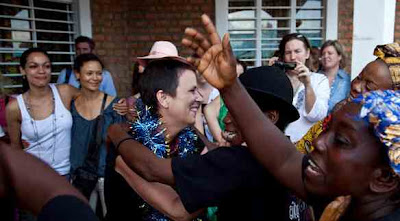 Jeffrey Gettleman writes in the NYTimes that Fighting Congo’s Ills With Education and an Army of Women is possible and transformative...

"For years, diplomats, aid workers, academics and government officials here have been vexed almost to the point of paralysis about how to attack this 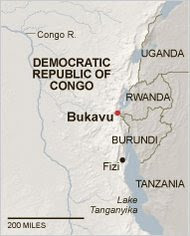 country’s staggering problem of sexual violence, in which hundreds of thousands of women have been raped, many quite sadistically, by the various armed groups who haunt the hills of eastern Congo. Sending in more troops has compounded the problem. United Nations peacekeepers have failed to stop it. Would reforming the Congolese military work? Building up the Congolese state? Pushing harder to regulate so-called conflict minerals to starve the rebels of an income? For Eve Ensler [...] the answer was simple. “You build an army of women,” she said. “And when you have enough women in power, they take over the government and they make different decisions [...] they’ll put an end to this rape problem fast.” Over the weekend, Ms. Ensler took the first step toward building this army: the opening of a base here in Bukavu called City of Joy. [...] It is a gutsy concept, to invest this heavily in a small group of mostly illiterate women -- about 180 leadership recruits per year -- in the hope that they will catalyze social change. But Ms. Ensler has faced long odds before, encouraging rape victims in Afghanistan, Bosnia and other war zones to speak out and become leaders. “This could be a turning point"

Such leadership development and transformation is absolutely essential and heroic.
Posted by Joost Bonsen at 23:56