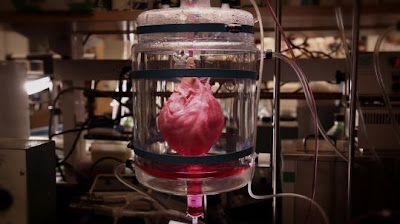 Carolyn Johnson writes in the Globe about Seeing local scientists at heart of regenerative medicine on the National Geographic Explorer show How to Build a Beating Heart...

"The cast includes a slate of local scientists with ambitious goals: to help people who have lost ears, limbs, or even need a new heart. In Dr. Joseph Vacanti’s lab at Massachusetts General Hospital, a mouse skitters around its cage with a half-size human ear growing on its back. Dr. Harald Ott, a surgeon at Mass. General, washes away cells from a human heart, leaving a cellular structure on which to construct a new one. At MIT, physicist Leon Bellan tries to build delicate blood vessels, drawing inspiration from cotton candy. Mixed with the science are the stories of people who could use a dose of regenerative medicine, and one who has already benefited from it: soldiers who have lost limbs; a 33-year-old woman who faces the sobering fear she will die waiting for a new heart; a young man who received a replacement bladder built out of his own cells. [...] Even as science advances, the truth is that many of the patients featured on the show may never reap the benefits of regenerative medicine. But that doesn’t diminish the exhilaration of watching the first steps toward the building of a beating human heart."