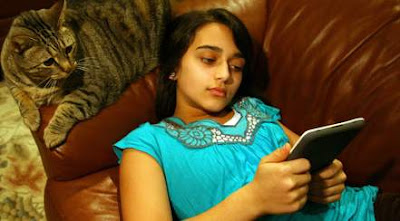 Julie Bosman writes in the NYTimes that E-Readers Catch Younger Eyes and Go in Backpacks...

"Something extraordinary happened after Eliana Litos received an e-reader for a Hanukkah gift in December. “Some weeks I completely forgot about TV,” said Eliana, 11. “I went two weeks with only watching one show, or no shows at all. I was just reading every day.” Ever since the holidays, publishers have noticed that some unusual titles have spiked in e-book sales. The “Chronicles of Narnia” series. “Hush, Hush.” The “Dork Diaries” series. At HarperCollins, for example, e-books made up 25 percent of all young-adult sales in January, up from about 6 percent a year before -- a boom in sales that quickly got the attention of publishers there. [...] now that e-readers are cheaper and more plentiful, they have gone mass market, reaching consumers across age and demographic groups, and enticing some members of the younger generation to pick them up for the first time. “The kids have taken over the e-readers,” said Rita Threadgill of Harrison, N.Y., whose 11-year-old daughter requested a Kindle for Christmas. In 2010 young-adult e-books made up about 6 percent of the total digital sales for titles published by St. Martin’s Press, but so far in 2011, the number is up to 20 percent, a spokeswoman for the publisher said."