Excellent to see the xmas special Economist spotlight Start-ups in India: A suitable business all about...

"30 Indian enterprises shortlisted in a competition to find the country’s “hottest” start-up. The contest, which attracted over 500 nominees, is run by the National Entrepreneurship Network (NEN), which promotes the spirit of enterprise on India’s campuses, and the Tata group, an Indian conglomerate."

The contest alone is interesting, as are the concerns the article raises. (Entrepreneurship is the coming thing in India as Boston's own Vinit Nijhawan documents in his recent series of Xconomy posts.) I was especially interested to read the Economist focus on Sammaan, an innovative cycle rickshaw business founded by Irfan Alam... 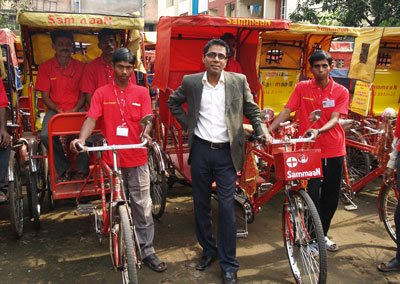 "...remembers clearly when he first felt the thirst for entrepreneurship. Sitting in the back of a cycle-rickshaw on a parched summer’s day in his hometown of Begusarai, he asked his rickshaw-puller for a drink of water. He points out that India’s rickshaw-pullers earn only a pittance after paying the rent on their vehicles. Perhaps, he thought, they could make a bit extra by selling drinks, newspapers or even mobile-phone cards to their passengers. And since the average rickshaw covers 10km (six miles) a day, perhaps it could also courier goods around town and advertise them to passers-by. These ideas evolved into Sammaan (which means dignity)."

Here's a Sammaan promo video on how "Money Empowers Life"... And generally in India there's been a big push to bring more modern designs and methods to bear on the cycle rickshaw sector...
Posted by Joost Bonsen at 20:24