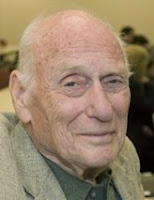 I first met him -- as did so many fellow MIT engineers -- in the classes he taught for nearly a half-century, 6.901/6.931 Inventions and Patents/Development of Inventions and Creative Ideas. Well before our contemporary appreciation for intellectual property, Rines wrote Create or Perish and championed the power and rights of the inventor. As fellow MIT alum-entrepreneur Z Holly poignantly remembers, Bob was a...

Indeed, perhaps Bob's most epic accomplishment is founding the Franklin Pierce Law Center in Concord, New Hampshire, which today is among the country's top places specializing in intellectual property law. The interesting back-story is that this was supposed to be the MIT School of Law -- but Rines was turned down by then MIT President Jerry Weisner, something I still think was a big mistake!
Posted by Joost Bonsen at 16:44