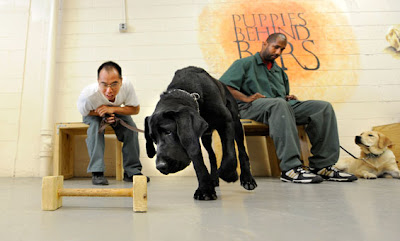 Glad I picked up the USAToday and read Joshua Hatch's piece Prison pups serve those who served about Puppies Behind Bars, a program which allows-encourages prisoners to train dogs to perform valuable tasks. This is great both because of the helpful abilities of these hounds, but because -- in the essential words of one prisoner -- taking on this responsibility is "Making me a better person". According to organizer Gloria Stoga...

"Prisoners are great puppy raisers, Stoga says, because "they put their all into each and every dog." Unlike professional trainers, she says, prisoners "have a real need and desire to prove they can do something right. Here is a chance for someone to say, 'You succeeded.' " "There's a level of responsibility that's involved, like having a little baby," says Eric Jenkins, 37. Convicted in a 1992 fatal shooting, Jenkins got into the program in 2007. He's training his second dog, a 3-month-old golden retriever named Skamper. "It compels you to extend yourself and not think only of yourself. I have to think about him first," Jenkins says, stroking Skamper's head. An inmate in the program -- who still has to do a regular prison job -- spends 24 hours a day with the dog. He must learn basic veterinary care, keep a journal and be an assistant to a primary trainer for at least six months before he gets his own puppy."

This is valuable and rehabilitative stuff.
Posted by Joost Bonsen at 15:34