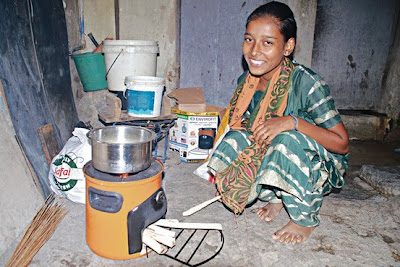 "Consider the basic cook stove -- a low-cost option that can dramatically reduce pollution. More than half the world's population burns fuel indoors to cook and heat their homes, according to the World Health Organization. Those indoor fires emit small particles that can get lodged in the lungs and that account for 1.5 million deaths annually, says the organization, which calls the fires "the killer in the kitchen." The fires also contribute to a smoggy plume known as the Atmospheric Brown Cloud. Studies, including some from Stanford University, say the cloud is trapping heat in the atmosphere. Several companies and nonprofit groups are trying to sell large numbers of low-cost stoves, particularly in India. The stoves look like pasta pots. Because of their design, they cook a meal with less wood, which they burn more cleanly. So the stoves can slash emissions of pollutants by more than half, manufacturers say."

One exemplar of this effort is Envirofit, the US social enterprise whose well-engineered, low-cost cook stove is pictured and whose co-founder "BOPreneur" Paul Hudnut is a key player in the growing development ventures movement!
Posted by Joost Bonsen at 20:32