A Better Mountain ~ From Stones Into Schools! 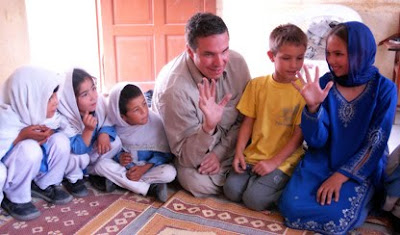 I love a great human-interest story and Parade delivers! Greg Mortenson writes about his work Fighting Terrorism With Schools. It started after a disasterously failed attempt to climb K2, the world's second-highest peak which located on the Pakistan-China border...

"I staggered into a tiny village called Korphe, where the impoverished residents gave me food, shelter -- and a mission. One afternoon, I watched 82 children scratch their lessons in the dirt with sticks. Among them was a girl named Chocho, who appealed to me to come back one day and build Korphe a school -- one that would be open to all children, even though, in that part of the world, the privilege of learning to read and write has traditionally been reserved for boys. Three years later, I kept my promise. The organization I founded, the Central Asia Institute (CAI), has kept right on building. Today, in the mountains of rural Pakistan -- where schools are scarce and all too often supported by the same radical Islamist money and ideology that fuels al-Qaeda and the Taliban -- CAI now has 91 schoolhouses. We serve 19,000 students -- three-quarters of them girls."

Mortenson's written about his experience in a to-be-published book, Stones Into Schools: Promoting Peace With Books, Not Bombs, in Afghanistan and Pakistan. About that aborted climb, though?

"A few months ago, I gave a talk in Durango, CO. A young girl raised her hand. "Will you ever go back and try to climb K2 again?” she asked. "No," I replied. "I’ve found a better mountain."

How beautiful is that -- A Better Mountain to climb!
Posted by Joost Bonsen at 18:36