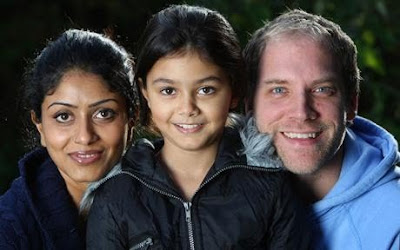 British geneticist Aarathi Prasad writes in the Telegraph that It's a wonderful, mixed-up world...

"...my daughter, and approximately 400,000 other children like her in Britain today, is mixed race. Families like mine are on the rise -- nearly one in 10 British children now lives in a mixed-race family, a figure that is six times higher than it was when I was a child [...] All my instincts as a geneticist make me question the notion of what it means to be "pure". As for it being a good thing, the potential for inherited disease in children of related individuals, or people from small communities, tells us that inbreeding is generally not a great idea. And there are very few communities in the world that are sufficiently inbred to be able to confer upon themselves the dubious honour of being "pure-bred". On the other hand, nature repeatedly shows us that genetically, diversity must be better: more diverse genes mean that animals are better at adapting to changing environmental conditions, and at fighting off and surviving infections."

Interesting stuff. Read the rest of the article for further elaboration of this sometimes touchy topic.
Posted by Joost Bonsen at 13:04