Mark Landler writes in the NYTimes, Trying to Break Logjam, Scholar Floats an Idea for a Palestinian Map...

"David Makovsky of the Washington Institute for Near East Policy, wanted to show, in concrete terms, how negotiators could create a new Palestinian state in the West Bank, using the pre-1967 boundaries of Israel as a baseline, while taking into account the roughly 300,000 Jewish settlers who now live there. The goal, Mr. Makovsky said, is to “demystify” the territorial hurdles that divide Israelis and Palestinians, and to debunk the notion that there is no way to reconcile the Palestinian demand for sovereignty over the West Bank with the Israeli demand for control over a majority of the settlers. “In my view, it is definitely possible to deal with each other’s core demands,” he said. “There are land swaps that would offset whatever settlements Israel would retain. The impossible is attainable.” To be sure, Mr. Makovsky’s maps are an academic exercise..." 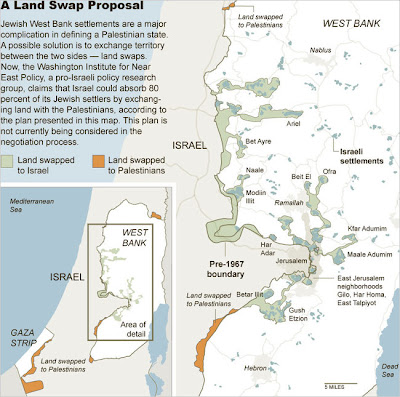